Swiss National Bank trimmed its position in Enerplus Co. (NYSE:ERF) (TSE:ERF) by 1.0% in the 2nd quarter, according to the company in its most recent disclosure with the Securities & Exchange Commission. The fund owned 566,755 shares of the oil and natural gas company’s stock after selling 6,000 shares during the quarter. Swiss National Bank owned about 0.22% of Enerplus worth $4,081,000 as of its most recent SEC filing.

Enerplus (NYSE:ERF) (TSE:ERF) last announced its quarterly earnings data on Thursday, August 5th. The oil and natural gas company reported $0.22 EPS for the quarter, missing the Zacks’ consensus estimate of $0.29 by ($0.07). Enerplus had a positive return on equity of 26.29% and a negative net margin of 32.54%. The company had revenue of $332.65 million for the quarter. On average, analysts predict that Enerplus Co. will post 1.16 EPS for the current fiscal year.

The firm also recently announced a quarterly dividend, which was paid on Wednesday, September 15th. Shareholders of record on Tuesday, August 31st were given a $0.0304 dividend. The ex-dividend date of this dividend was Monday, August 30th. This represents a $0.12 dividend on an annualized basis and a yield of 2.01%. This is an increase from Enerplus’s previous quarterly dividend of $0.03. Enerplus’s payout ratio is currently 171.43%.

Enerplus Corp. engages in the exploration and production of crude oil and natural gas. It conducts operations in Willston Basin, Marcellus Shale, and Canadian Waterfloods. The company was founded in 1986 and is headquartered in Calgary, Canada. 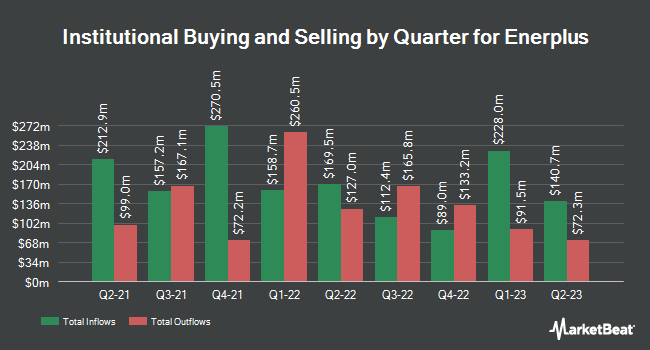 Receive News & Ratings for Enerplus Daily - Enter your email address below to receive a concise daily summary of the latest news and analysts' ratings for Enerplus and related companies with MarketBeat.com's FREE daily email newsletter.

Complete the form below to receive the latest headlines and analysts' recommendations for Enerplus with our free daily email newsletter: