US Bancorp DE lifted its holdings in Pembina Pipeline Co. (NYSE:PBA) (TSE:PPL) by 42.4% in the 2nd quarter, according to the company in its most recent disclosure with the Securities & Exchange Commission. The firm owned 1,855 shares of the pipeline company’s stock after buying an additional 552 shares during the period. US Bancorp DE’s holdings in Pembina Pipeline were worth $59,000 as of its most recent SEC filing.

Pembina Pipeline (NYSE:PBA) (TSE:PPL) last posted its quarterly earnings data on Thursday, August 5th. The pipeline company reported $0.32 EPS for the quarter, missing analysts’ consensus estimates of $0.48 by ($0.16). Pembina Pipeline had a positive return on equity of 9.58% and a negative net margin of 4.83%. The business had revenue of $1.59 billion during the quarter. Research analysts forecast that Pembina Pipeline Co. will post 1.87 earnings per share for the current year.

The company also recently announced a monthly dividend, which will be paid on Friday, October 15th. Investors of record on Friday, September 24th will be given a dividend of $0.166 per share. This represents a $1.99 dividend on an annualized basis and a yield of 6.47%. The ex-dividend date is Thursday, September 23rd. Pembina Pipeline’s dividend payout ratio (DPR) is presently 136.73%. 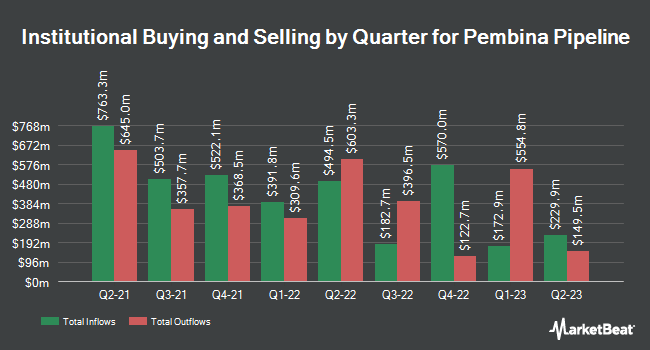 Complete the form below to receive the latest headlines and analysts' recommendations for Pembina Pipeline with our free daily email newsletter: