American Century Companies Inc. decreased its position in Visteon Co. (NASDAQ:VC) by 84.5% in the 2nd quarter, according to the company in its most recent filing with the Securities and Exchange Commission. The fund owned 3,778 shares of the company’s stock after selling 20,573 shares during the period. American Century Companies Inc.’s holdings in Visteon were worth $457,000 as of its most recent SEC filing.

In other news, VP Brett D. Pynnonen sold 8,836 shares of the firm’s stock in a transaction dated Thursday, August 5th. The shares were sold at an average price of $115.12, for a total transaction of $1,017,200.32. Following the completion of the transaction, the vice president now directly owns 4,492 shares of the company’s stock, valued at approximately $517,119.04. The transaction was disclosed in a legal filing with the Securities & Exchange Commission, which is available through this hyperlink. Company insiders own 1.60% of the company’s stock.

Visteon (NASDAQ:VC) last posted its quarterly earnings results on Wednesday, July 28th. The company reported ($0.32) earnings per share (EPS) for the quarter, missing the consensus estimate of $0.03 by ($0.35). The company had revenue of $610.00 million during the quarter, compared to analyst estimates of $642.38 million. Visteon had a return on equity of 14.96% and a net margin of 1.00%. As a group, analysts anticipate that Visteon Co. will post 2.4 EPS for the current fiscal year.

Read More: Purposes and Functions of the Federal Reserve 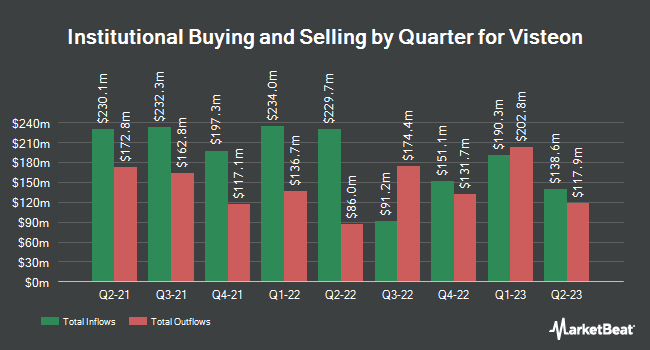 Receive News & Ratings for Visteon Daily - Enter your email address below to receive a concise daily summary of the latest news and analysts' ratings for Visteon and related companies with MarketBeat.com's FREE daily email newsletter.

MP Materials Corp. Expected to Announce Earnings of $0.16 Per Share

Equitrans Midstream Co. Given Consensus Rating of “Hold” by Brokerages

Complete the form below to receive the latest headlines and analysts' recommendations for Visteon with our free daily email newsletter: