Next Century Growth Investors LLC decreased its holdings in EPAM Systems, Inc. (NYSE:EPAM) by 2.8% during the 2nd quarter, Holdings Channel.com reports. The fund owned 4,044 shares of the information technology services provider’s stock after selling 117 shares during the quarter. Next Century Growth Investors LLC’s holdings in EPAM Systems were worth $2,066,000 as of its most recent SEC filing.

EPAM Systems (NYSE:EPAM) last posted its earnings results on Thursday, August 5th. The information technology services provider reported $2.05 earnings per share (EPS) for the quarter, topping the Thomson Reuters’ consensus estimate of $1.94 by $0.11. EPAM Systems had a return on equity of 18.89% and a net margin of 13.12%. The company had revenue of $881.40 million for the quarter, compared to analysts’ expectations of $861.36 million. During the same period last year, the firm earned $1.46 earnings per share. EPAM Systems’s quarterly revenue was up 39.4% on a year-over-year basis. As a group, equities research analysts expect that EPAM Systems, Inc. will post 7.13 EPS for the current fiscal year.

EPAM Systems, Inc engages in the provision of software product development and digital platform engineering services. It operates through the following geographical segments: North America, Europe, and Russia. The company was founded by Leonid Lozner and Arkadiy Dobkin in 1993 and is headquartered in Newtown, PA.

Featured Article: What is a Reverse Stock Split?

Want to see what other hedge funds are holding EPAM? Visit HoldingsChannel.com to get the latest 13F filings and insider trades for EPAM Systems, Inc. (NYSE:EPAM). 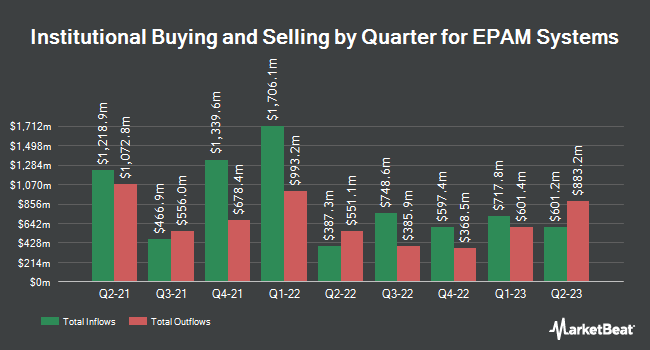 Complete the form below to receive the latest headlines and analysts' recommendations for EPAM Systems with our free daily email newsletter: