$558.09 Million in Sales Expected for The GEO Group, Inc. (NYSE:GEO) This Quarter

Analysts predict that The GEO Group, Inc. (NYSE:GEO) will report sales of $558.09 million for the current quarter, according to Zacks. Three analysts have made estimates for The GEO Group’s earnings, with the highest sales estimate coming in at $558.40 million and the lowest estimate coming in at $557.88 million. The GEO Group reported sales of $578.12 million in the same quarter last year, which indicates a negative year-over-year growth rate of 3.5%. The company is scheduled to issue its next earnings report on Tuesday, February 15th.

On average, analysts expect that The GEO Group will report full year sales of $2.26 billion for the current fiscal year. For the next financial year, analysts anticipate that the company will post sales of $2.18 billion, with estimates ranging from $2.14 billion to $2.21 billion. Zacks’ sales calculations are a mean average based on a survey of sell-side analysts that cover The GEO Group.

The GEO Group (NYSE:GEO) last released its quarterly earnings data on Thursday, November 4th. The real estate investment trust reported $0.36 earnings per share for the quarter, missing the Thomson Reuters’ consensus estimate of $0.64 by ($0.28). The firm had revenue of $557.28 million for the quarter, compared to analyst estimates of $551.53 million. The GEO Group had a net margin of 6.11% and a return on equity of 16.58%. The company’s revenue was down 3.8% compared to the same quarter last year. During the same period last year, the business earned $0.67 EPS.

Separately, Zacks Investment Research raised The GEO Group from a “hold” rating to a “buy” rating and set a $11.00 price objective for the company in a research report on Tuesday, November 9th.

The GEO Group, Inc is a real estate investment trust, which specializes in the ownership, lease, and management of correctional, detention, and re-entry facilities. It operates through the following segments: U.S. Secure Services; GEO Care; International Services; and Facility Construction and Design. 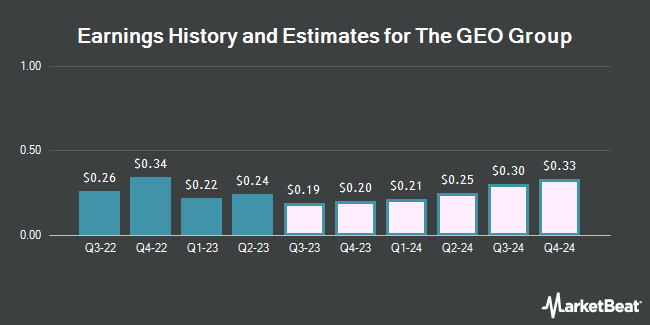 Complete the form below to receive the latest headlines and analysts' recommendations for The GEO Group with our free daily email newsletter: