BlackRock MuniAssets Fund, Inc. (NYSE:MUA) declared a monthly dividend on Wednesday, January 5th, Wall Street Journal reports. Investors of record on Friday, January 14th will be paid a dividend of 0.0455 per share by the investment management company on Tuesday, February 1st. This represents a $0.55 dividend on an annualized basis and a dividend yield of 3.68%. The ex-dividend date is Thursday, January 13th.

BlackRock MuniAssets Fund has raised its dividend payment by 14.4% over the last three years.

BlackRock MuniAssets Fund, Inc is a closed ended fixed income mutual fund launched by BlackRock, Inc It is managed by BlackRock Advisors, LLC. The fund invests in fixed income markets. It seeks to provide current income exempt from federal income taxes by investing primarily in a portfolio of medium-to-lower grade or unrated municipal obligations the interest on which is exempt from federal income taxes. 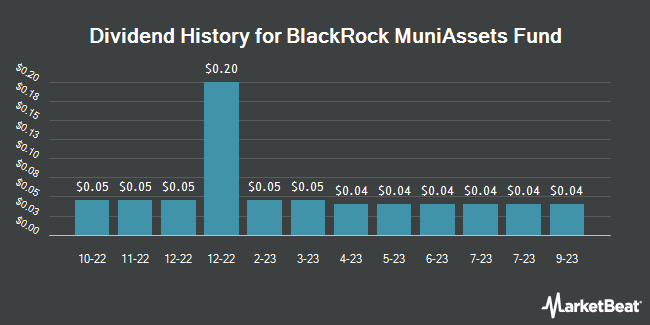 Complete the form below to receive the latest headlines and analysts' recommendations for BlackRock MuniAssets Fund with our free daily email newsletter: