Victory Capital Management Inc. grew its holdings in Atlantic Union Bankshares Co. (NASDAQ:AUB) by 7.0% in the 3rd quarter, according to the company in its most recent Form 13F filing with the SEC. The institutional investor owned 19,057 shares of the company’s stock after acquiring an additional 1,245 shares during the quarter. Victory Capital Management Inc.’s holdings in Atlantic Union Bankshares were worth $702,000 at the end of the most recent reporting period.

The firm also recently disclosed a quarterly dividend, which was paid on Friday, November 26th. Stockholders of record on Friday, November 12th were given a $0.28 dividend. This represents a $1.12 dividend on an annualized basis and a dividend yield of 2.66%. The ex-dividend date was Wednesday, November 10th. Atlantic Union Bankshares’s dividend payout ratio (DPR) is presently 33.14%.

In other Atlantic Union Bankshares news, Director Frederick Blair Wimbush acquired 1,500 shares of the business’s stock in a transaction dated Monday, December 20th. The stock was acquired at an average cost of $35.82 per share, for a total transaction of $53,730.00. The purchase was disclosed in a legal filing with the Securities & Exchange Commission, which is available through this link. 1.14% of the stock is owned by insiders.

Want to see what other hedge funds are holding AUB? Visit HoldingsChannel.com to get the latest 13F filings and insider trades for Atlantic Union Bankshares Co. (NASDAQ:AUB). 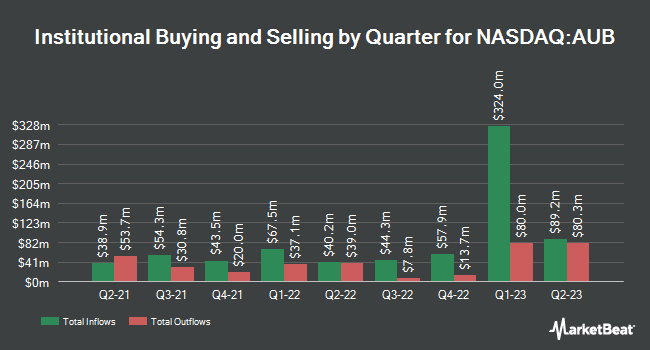 Swiss Re Upgraded by Societe Generale to Buy