CareDx, Inc (NASDAQ:CDNA) has been assigned an average recommendation of “Buy” from the seven ratings firms that are covering the firm, Marketbeat reports. One equities research analyst has rated the stock with a sell rating, one has assigned a hold rating, three have issued a buy rating and one has assigned a strong buy rating to the company. The average twelve-month price objective among brokers that have issued ratings on the stock in the last year is $98.50.

CareDx (NASDAQ:CDNA) last released its quarterly earnings data on Thursday, October 28th. The company reported $0.07 earnings per share for the quarter, topping analysts’ consensus estimates of ($0.14) by $0.21. The firm had revenue of $75.60 million during the quarter, compared to analyst estimates of $74.11 million. CareDx had a negative return on equity of 4.24% and a negative net margin of 6.54%. The business’s quarterly revenue was up 41.6% compared to the same quarter last year. During the same quarter in the prior year, the company posted ($0.06) earnings per share. As a group, analysts predict that CareDx will post -0.46 earnings per share for the current fiscal year.

In other CareDx news, Director Peter Maag sold 10,000 shares of the company’s stock in a transaction that occurred on Wednesday, January 5th. The stock was sold at an average price of $44.45, for a total transaction of $444,500.00. The sale was disclosed in a filing with the SEC, which can be accessed through the SEC website. Also, CFO Ankur Dhingra acquired 5,000 shares of the firm’s stock in a transaction on Wednesday, November 24th. The shares were bought at an average price of $42.34 per share, for a total transaction of $211,700.00. The disclosure for this purchase can be found here. Insiders sold 31,500 shares of company stock worth $1,422,660 over the last quarter. 4.60% of the stock is owned by company insiders.

CareDx, Inc operates as a transplant diagnostics company, which discovers, develops and commercializes diagnostic solutions. Its product includes AlloMap, AlloSure and Laboratory products. The company was founded on December 21, 1998 and is headquartered in South San Francisco, CA.

Featured Article: What is the definition of market timing? 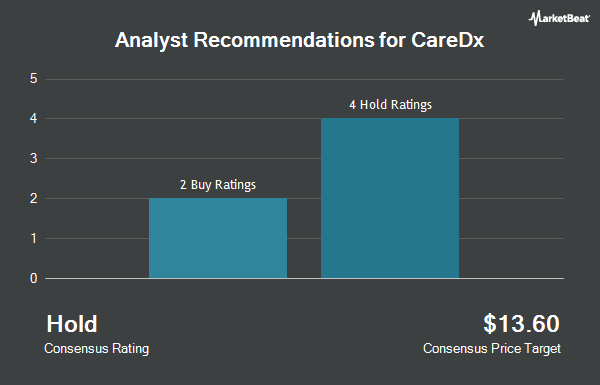 Receive News & Ratings for CareDx Daily - Enter your email address below to receive a concise daily summary of the latest news and analysts' ratings for CareDx and related companies with MarketBeat.com's FREE daily email newsletter.

Complete the form below to receive the latest headlines and analysts' recommendations for CareDx with our free daily email newsletter: