AMC Entertainment Holdings, Inc. (NYSE:AMC) CAO Chris A. Cox sold 20,000 shares of the firm’s stock in a transaction on Wednesday, January 12th. The stock was sold at an average price of $22.97, for a total transaction of $459,400.00. The transaction was disclosed in a legal filing with the Securities & Exchange Commission, which can be accessed through this link.

AMC Entertainment (NYSE:AMC) last released its quarterly earnings results on Monday, November 8th. The company reported ($0.44) EPS for the quarter, beating the Thomson Reuters’ consensus estimate of ($0.53) by $0.09. The firm had revenue of $763.20 million for the quarter, compared to analyst estimates of $742.15 million. The firm’s quarterly revenue was up 538.7% compared to the same quarter last year. During the same quarter in the prior year, the business posted ($5.70) EPS. Sell-side analysts anticipate that AMC Entertainment Holdings, Inc. will post -2.68 EPS for the current year.

AMC Entertainment Holdings, Inc engages in the theatrical exhibition business through its subsidiaries. It operates through the United States Markets and International Markets segments. The United States segment involves in the activity in the U.S. specifically in New York, Los Angeles, Chicago, Atlanta, and Washington, DC. 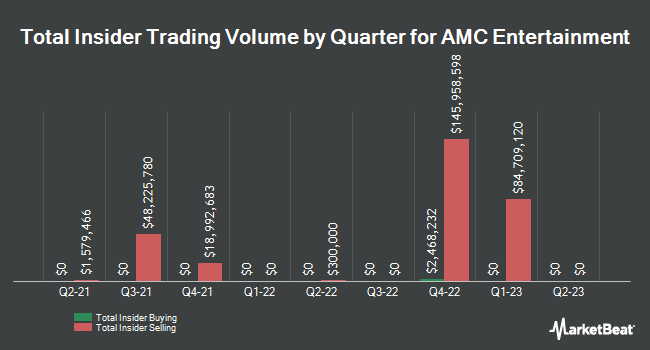 Ultra Trading Down 9.8% This Week

Rio Tinto Group Given Consensus Recommendation of “Hold” by Brokerages