KB Home (NYSE:KBH) posted its quarterly earnings data on Wednesday. The construction company reported $1.91 EPS for the quarter, beating analysts’ consensus estimates of $1.77 by $0.14, MarketWatch Earnings reports. KB Home had a net margin of 9.86% and a return on equity of 20.13%. The company had revenue of $1.68 billion during the quarter, compared to analyst estimates of $1.71 billion. During the same period in the prior year, the firm earned $1.12 earnings per share. The business’s quarterly revenue was up 40.3% on a year-over-year basis.

KB Home engages in selling and building a variety of new homes. It builds various types of homes, including attached and detached single-family homes, townhomes, and condominiums. The firm operates through the following segments: West Coast, Southwest, Central, and Southeast. It offer homes in development communities, at urban in-fill locations and as part of mixed-use projects. 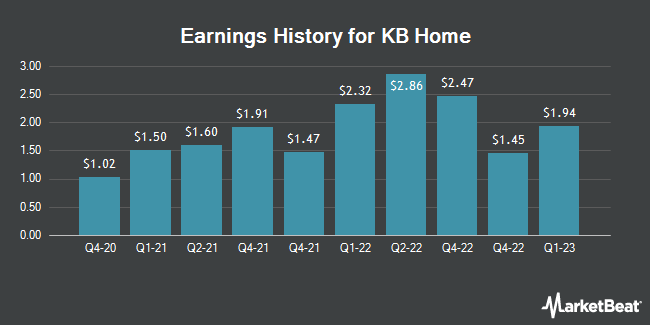 Complete the form below to receive the latest headlines and analysts' recommendations for KB Home with our free daily email newsletter: