Lear (NYSE:LEA) last posted its earnings results on Monday, November 1st. The auto parts company reported $0.53 earnings per share for the quarter, missing the consensus estimate of $0.56 by ($0.03). The firm had revenue of $4.27 billion for the quarter, compared to analysts’ expectations of $4.18 billion. Lear had a net margin of 2.82% and a return on equity of 13.20%. During the same period last year, the firm earned $3.73 earnings per share. On average, sell-side analysts anticipate that Lear will post 7.8 earnings per share for the current fiscal year.

In other Lear news, VP Marianne Vidershain sold 170 shares of Lear stock in a transaction on Wednesday, November 10th. The shares were sold at an average price of $179.01, for a total transaction of $30,431.70. The sale was disclosed in a legal filing with the SEC, which is accessible through the SEC website. Insiders own 0.43% of the company’s stock.

Lear Corp. engages in the design, manufacture and supply of automotive seat, electrical distribution systems and electronic modules, as well as related sub-systems, components, and software. It operates through the following segments: Seating and E-Systems. The Seating segment consists of the design, engineering, just-in-time assembly and delivery of complete seat systems, as well as the manufacture of all major seat components, including seat covers and surface materials such as leather and fabric, seat structures and mechanisms, seat foam and headrests. 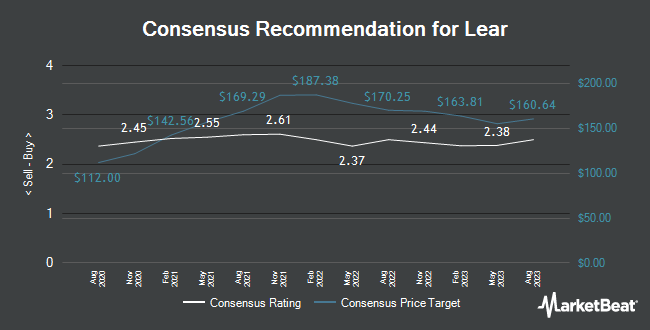 Receive News & Ratings for Lear Daily - Enter your email address below to receive a concise daily summary of the latest news and analysts' ratings for Lear and related companies with MarketBeat.com's FREE daily email newsletter.

OriginTrail Price Down 34.6% Over Last 7 Days

Weibo Co. Given Average Rating of “Hold” by Analysts

Complete the form below to receive the latest headlines and analysts' recommendations for Lear with our free daily email newsletter: