In other news, President William Lynch sold 2,268 shares of the stock in a transaction that occurred on Tuesday, November 16th. The stock was sold at an average price of $53.13, for a total value of $120,498.84. The sale was disclosed in a legal filing with the Securities & Exchange Commission, which can be accessed through this hyperlink. Also, insider X Cycle L.P. Tcv purchased 641,620 shares of the company’s stock in a transaction that occurred on Thursday, November 18th. The shares were acquired at an average cost of $46.00 per share, with a total value of $29,514,520.00. The disclosure for this purchase can be found here. Over the last three months, insiders sold 107,801 shares of company stock valued at $9,553,661. 13.18% of the stock is currently owned by insiders.

Want to see what other hedge funds are holding PTON? Visit HoldingsChannel.com to get the latest 13F filings and insider trades for Peloton Interactive, Inc. (NASDAQ:PTON). 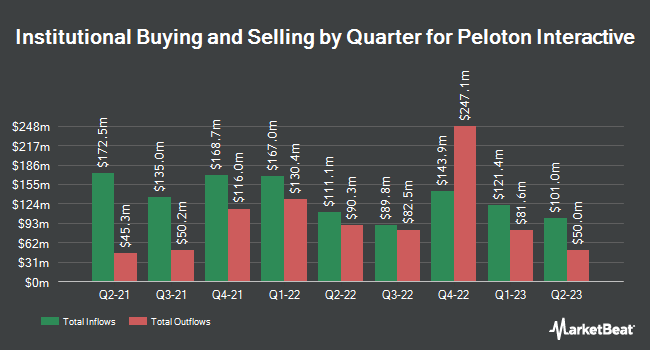 Complete the form below to receive the latest headlines and analysts' recommendations for Peloton Interactive with our free daily email newsletter: