SFL has decreased its dividend by an average of 23.4% annually over the last three years and has raised its dividend every year for the last 2 years. SFL has a payout ratio of 80.8% meaning its dividend is currently covered by earnings, but may not be in the future if the company’s earnings fall. Equities analysts expect SFL to earn $1.06 per share next year, which means the company should continue to be able to cover its $0.80 annual dividend with an expected future payout ratio of 75.5%.

SFL (NYSE:SFL – Get Rating) last announced its quarterly earnings results on Thursday, May 12th. The shipping company reported $0.37 earnings per share for the quarter, beating analysts’ consensus estimates of $0.24 by $0.13. The business had revenue of $152.40 million for the quarter, compared to the consensus estimate of $138.71 million. SFL had a net margin of 32.01% and a return on equity of 12.77%. SFL’s revenue for the quarter was up 39.6% on a year-over-year basis. During the same period last year, the company posted $0.19 EPS. On average, sell-side analysts predict that SFL will post 1.04 EPS for the current year.

SFL Corporation Ltd., a maritime and offshore asset owning and chartering company, engages in the ownership, operation, and chartering out of vessels and offshore related assets on medium and long-term charters. The company is also involved in the charter, purchase, and sale of assets. In addition, it operates in various sectors of the maritime, and shipping and offshore industries, including oil, chemical, oil product, container, and car transportation, as well as dry bulk shipments and drilling rigs. 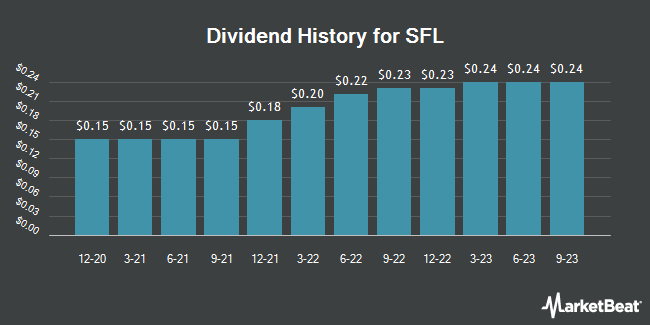 Receive News & Ratings for SFL Daily - Enter your email address below to receive a concise daily summary of the latest news and analysts' ratings for SFL and related companies with MarketBeat.com's FREE daily email newsletter.

Complete the form below to receive the latest headlines and analysts' recommendations for SFL with our free daily email newsletter: