DoubleVerify (NYSE:DV – Get Rating) had its price objective reduced by JPMorgan Chase & Co. from $30.00 to $26.00 in a research report report published on Wednesday, The Fly reports.

DoubleVerify (NYSE:DV – Get Rating) last released its quarterly earnings data on Tuesday, May 10th. The company reported $0.03 earnings per share for the quarter, meeting analysts’ consensus estimates of $0.03. The company had revenue of $96.72 million for the quarter, compared to the consensus estimate of $89.87 million. DoubleVerify had a return on equity of 5.63% and a net margin of 7.80%. The company’s quarterly revenue was up 43.1% on a year-over-year basis. During the same period in the previous year, the business earned $0.04 earnings per share. Research analysts predict that DoubleVerify will post 0.28 EPS for the current fiscal year.

In other news, CEO Mark Zagorski bought 17,846 shares of the stock in a transaction that occurred on Tuesday, March 29th. The stock was acquired at an average price of $25.64 per share, with a total value of $457,571.44. The acquisition was disclosed in a document filed with the Securities & Exchange Commission, which can be accessed through this hyperlink. Also, COO Matthew F. Mclaughlin sold 20,000 shares of DoubleVerify stock in a transaction on Wednesday, February 23rd. The stock was sold at an average price of $25.01, for a total transaction of $500,200.00. The disclosure for this sale can be found here. Over the last ninety days, insiders sold 65,648 shares of company stock worth $1,598,067. 5.61% of the stock is owned by insiders.

About DoubleVerify (Get Rating)

DoubleVerify Holdings, Inc provides a software platform for digital media measurement, data, and analytics in the United States and internationally. Its solutions provide advertisers unbiased data analytics that enable advertisers to increase the effectiveness, quality and return on their digital advertising investments. 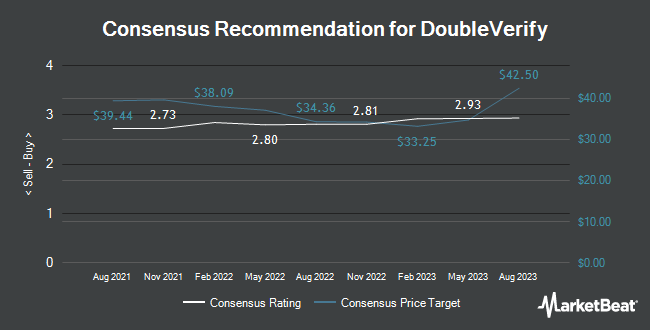 Complete the form below to receive the latest headlines and analysts' recommendations for DoubleVerify with our free daily email newsletter: