Casey’s General Stores (NASDAQ:CASY – Get Rating) posted its quarterly earnings data on Tuesday. The company reported $1.60 earnings per share (EPS) for the quarter, beating analysts’ consensus estimates of $1.48 by $0.12, Briefing.com reports. Casey’s General Stores had a net margin of 2.62% and a return on equity of 16.08%. The firm had revenue of $3.46 billion during the quarter, compared to the consensus estimate of $3.45 billion. During the same quarter in the previous year, the firm posted $1.12 EPS. The business’s revenue for the quarter was up 45.4% compared to the same quarter last year.

The company also recently disclosed a quarterly dividend, which will be paid on Monday, August 15th. Stockholders of record on Monday, August 1st will be given a dividend of $0.38 per share. The ex-dividend date of this dividend is Friday, July 29th. This is a boost from Casey’s General Stores’s previous quarterly dividend of $0.35. This represents a $1.52 annualized dividend and a dividend yield of 0.77%. Casey’s General Stores’s dividend payout ratio is 15.40%.

Casey's General Stores, Inc, together with its subsidiaries, operates convenience stores under the Casey's and Casey's General Store names. Its stores offer a selection of food, including freshly prepared foods, such as pizza, donuts, and sandwiches; tobacco, and nicotine products; health and beauty aids; automotive products; and other nonfood items. 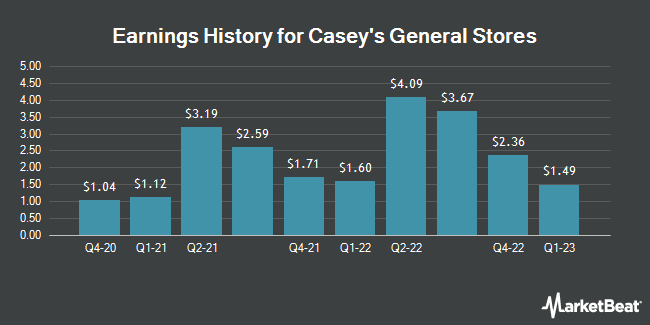