Thor Industries (NYSE:THO – Get Rating) announced its quarterly earnings data on Wednesday. The construction company reported $6.32 earnings per share (EPS) for the quarter, beating analysts’ consensus estimates of $4.87 by $1.45, Briefing.com reports. Thor Industries had a net margin of 6.76% and a return on equity of 34.04%. The firm had revenue of $4.66 billion for the quarter, compared to analysts’ expectations of $4.18 billion. During the same period last year, the firm earned $3.29 earnings per share. The business’s revenue for the quarter was up 34.6% on a year-over-year basis.

In other Thor Industries news, Director James L. Ziemer purchased 10,000 shares of the firm’s stock in a transaction on Tuesday, April 5th. The shares were purchased at an average cost of $80.53 per share, with a total value of $805,300.00. Following the completion of the purchase, the director now owns 29,835 shares of the company’s stock, valued at approximately $2,402,612.55. The purchase was disclosed in a legal filing with the SEC, which can be accessed through this link. Company insiders own 4.30% of the company’s stock.

About Thor Industries (Get Rating) 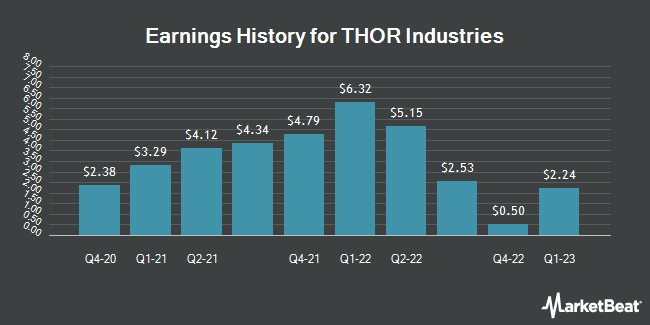 Complete the form below to receive the latest headlines and analysts' recommendations for Thor Industries with our free daily email newsletter: