Enviva Inc. (NYSE:EVA – Get Rating) announced a quarterly dividend on Wednesday, August 3rd, Zacks reports. Stockholders of record on Monday, August 15th will be given a dividend of 0.905 per share by the energy company on Friday, August 26th. This represents a $3.62 annualized dividend and a dividend yield of 5.21%. The ex-dividend date is Friday, August 12th.

Enviva (NYSE:EVA – Get Rating) last issued its earnings results on Thursday, May 5th. The energy company reported ($0.11) earnings per share for the quarter, beating analysts’ consensus estimates of ($0.19) by $0.08. Enviva had a negative return on equity of 24.48% and a negative net margin of 14.67%. The firm had revenue of $232.98 million for the quarter, compared to analysts’ expectations of $257.49 million. Analysts expect that Enviva will post 0.7 EPS for the current year.

Several research analysts have commented on EVA shares. JPMorgan Chase & Co. raised their price objective on Enviva from $70.00 to $71.00 in a research report on Wednesday, July 20th. StockNews.com upgraded Enviva to a “sell” rating in a research note on Thursday. One equities research analyst has rated the stock with a sell rating, four have given a hold rating and three have issued a buy rating to the company. According to data from MarketBeat, Enviva presently has a consensus rating of “Hold” and an average price target of $76.71.

Enviva Inc produces and sells utility-grade wood pellets. The company's products are used as a substitute for coal in power generation, and combined heat and power plants. It serves power generators in the United Kingdom, Europe, and Japan. The company was formerly known as Enviva Partners, LP. Enviva Inc was incorporated in 2013 and is headquartered in Bethesda, Maryland. 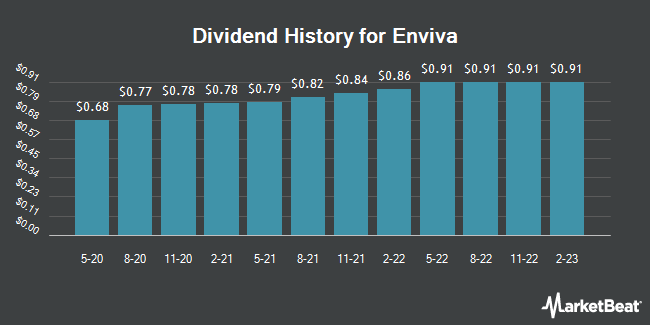 Receive News & Ratings for Enviva Daily - Enter your email address below to receive a concise daily summary of the latest news and analysts' ratings for Enviva and related companies with MarketBeat.com's FREE daily email newsletter.

CTS Rating Increased to B- at TheStreet

Summit Materials Upgraded to “B” at TheStreet

Complete the form below to receive the latest headlines and analysts' recommendations for Enviva with our free daily email newsletter: