NIKE, Inc. (NYSE:NKE – Get Rating) COO Andrew Campion sold 5,922 shares of the business’s stock in a transaction dated Wednesday, August 3rd. The stock was sold at an average price of $113.42, for a total transaction of $671,673.24. Following the sale, the chief operating officer now directly owns 75,295 shares of the company’s stock, valued at approximately $8,539,958.90. The transaction was disclosed in a legal filing with the Securities & Exchange Commission, which can be accessed through this link.

NIKE (NYSE:NKE – Get Rating) last released its quarterly earnings results on Monday, June 27th. The footwear maker reported $0.90 EPS for the quarter, topping the consensus estimate of $0.81 by $0.09. The business had revenue of $12.20 billion during the quarter, compared to analyst estimates of $12.10 billion. NIKE had a net margin of 12.94% and a return on equity of 40.74%. The company’s quarterly revenue was down .8% on a year-over-year basis. During the same quarter in the prior year, the firm earned $0.93 earnings per share. As a group, sell-side analysts anticipate that NIKE, Inc. will post 3.82 EPS for the current year.

The business also recently announced a quarterly dividend, which will be paid on Monday, October 3rd. Investors of record on Tuesday, September 6th will be given a $0.305 dividend. This represents a $1.22 dividend on an annualized basis and a yield of 1.07%. NIKE’s dividend payout ratio is presently 32.45%.

NIKE declared that its Board of Directors has initiated a share buyback plan on Monday, June 27th that authorizes the company to repurchase $18.00 billion in shares. This repurchase authorization authorizes the footwear maker to reacquire up to 11% of its stock through open market purchases. Stock repurchase plans are often a sign that the company’s leadership believes its stock is undervalued.

Hedge Funds Weigh In On NIKE 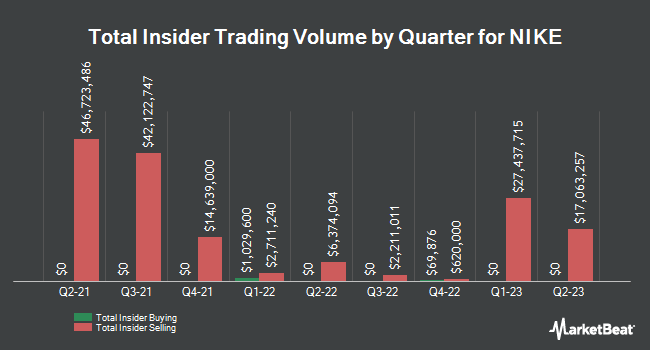 Receive News & Ratings for NIKE Daily - Enter your email address below to receive a concise daily summary of the latest news and analysts' ratings for NIKE and related companies with MarketBeat.com's FREE daily email newsletter.

Cyclub Trading Up 1.7% Over Last Week

Complete the form below to receive the latest headlines and analysts' recommendations for NIKE with our free daily email newsletter: