Intercontinental Wealth Advisors LLC acquired a new stake in shares of Vroom, Inc. (NASDAQ:VRM – Get Rating) during the 1st quarter, according to its most recent 13F filing with the SEC. The firm acquired 10,431 shares of the company’s stock, valued at approximately $28,000.

Vroom (NASDAQ:VRM – Get Rating) last released its earnings results on Monday, May 9th. The company reported ($0.71) earnings per share for the quarter, topping the consensus estimate of ($1.03) by $0.32. The company had revenue of $923.50 million for the quarter, compared to the consensus estimate of $878.18 million. Vroom had a negative net margin of 17.18% and a negative return on equity of 41.73%. Vroom’s revenue was up 56.2% compared to the same quarter last year. During the same quarter in the previous year, the firm earned ($0.57) EPS. Analysts anticipate that Vroom, Inc. will post -3.06 EPS for the current year.

A number of equities analysts have commented on VRM shares. Wedbush reissued an “outperform” rating on shares of Vroom in a research note on Tuesday, May 10th. Stifel Nicolaus lowered their target price on shares of Vroom from $2.00 to $1.50 in a report on Tuesday, June 28th. Finally, William Blair lowered shares of Vroom from an “outperform” rating to a “market perform” rating in a report on Thursday, April 28th. Six equities research analysts have rated the stock with a hold rating and two have given a buy rating to the stock. According to MarketBeat.com, Vroom presently has a consensus rating of “Hold” and a consensus target price of $16.28. 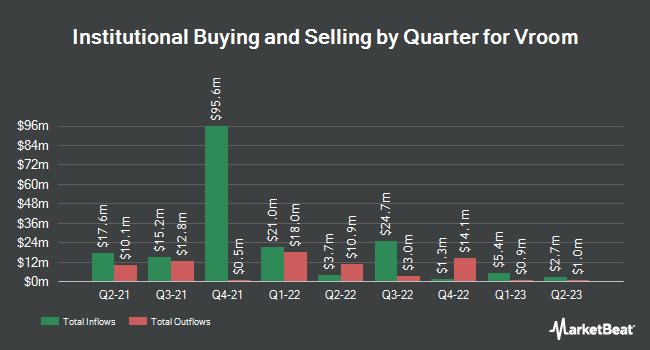 Receive News & Ratings for Vroom Daily - Enter your email address below to receive a concise daily summary of the latest news and analysts' ratings for Vroom and related companies with MarketBeat.com's FREE daily email newsletter.

Complete the form below to receive the latest headlines and analysts' recommendations for Vroom with our free daily email newsletter: