Kennedy-Wilson Holdings, Inc. (NYSE:KW – Get Rating) announced a quarterly dividend on Thursday, August 4th, Wall Street Journal reports. Investors of record on Friday, September 30th will be given a dividend of 0.24 per share by the financial services provider on Thursday, October 6th. This represents a $0.96 annualized dividend and a yield of 4.91%. The ex-dividend date of this dividend is Thursday, September 29th.

Kennedy-Wilson (NYSE:KW – Get Rating) last released its earnings results on Wednesday, May 4th. The financial services provider reported $0.58 EPS for the quarter, beating the consensus estimate of $0.41 by $0.17. Kennedy-Wilson had a net margin of 30.28% and a return on equity of 22.69%. The business had revenue of $124.70 million during the quarter, compared to analyst estimates of $184.80 million. During the same period in the prior year, the business earned $0.34 earnings per share. The business’s quarterly revenue was up 25.5% on a year-over-year basis. Equities research analysts forecast that Kennedy-Wilson will post 1.85 earnings per share for the current fiscal year.

Institutional Investors Weigh In On Kennedy-Wilson

Separately, TheStreet lowered shares of Kennedy-Wilson from a “b-” rating to a “c+” rating in a research note on Tuesday, May 10th.

Kennedy-Wilson Holdings, Inc, together with its subsidiaries, operates as a real estate investment company. The company owns, operates, and invests in real estate both on its own and through its investment management platform. It focuses on multifamily and office properties located in the Western United States, the United Kingdom, Ireland, Spain, Italy, and Japan. 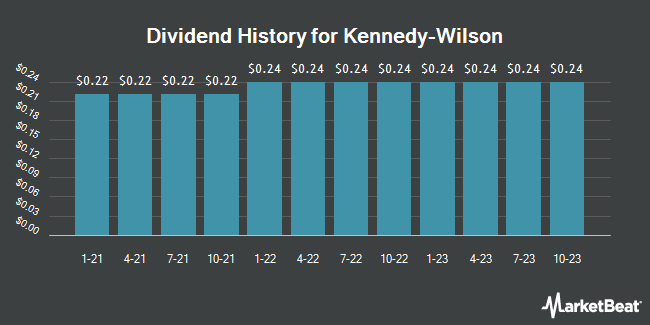 Complete the form below to receive the latest headlines and analysts' recommendations for Kennedy-Wilson with our free daily email newsletter: