Moody’s Co. (NYSE:MCO – Get Rating) SVP Caroline Sullivan sold 326 shares of the stock in a transaction that occurred on Thursday, August 4th. The stock was sold at an average price of $310.68, for a total value of $101,281.68. Following the completion of the transaction, the senior vice president now owns 1,806 shares of the company’s stock, valued at $561,088.08. The sale was disclosed in a filing with the Securities & Exchange Commission, which is accessible through the SEC website.

Moody’s (NYSE:MCO – Get Rating) last posted its quarterly earnings results on Tuesday, July 26th. The business services provider reported $2.22 earnings per share for the quarter, missing analysts’ consensus estimates of $2.34 by ($0.12). The business had revenue of $1.38 billion during the quarter, compared to analyst estimates of $1.43 billion. Moody’s had a net margin of 28.92% and a return on equity of 71.12%. The firm’s quarterly revenue was down 11.1% on a year-over-year basis. During the same quarter in the prior year, the business earned $3.22 earnings per share. On average, sell-side analysts expect that Moody’s Co. will post 9.48 EPS for the current fiscal year.

The company also recently disclosed a quarterly dividend, which will be paid on Friday, September 9th. Shareholders of record on Friday, August 19th will be issued a dividend of $0.70 per share. This represents a $2.80 annualized dividend and a dividend yield of 0.90%. The ex-dividend date is Thursday, August 18th. Moody’s’s payout ratio is 30.24%.

Hedge Funds Weigh In On Moody’s 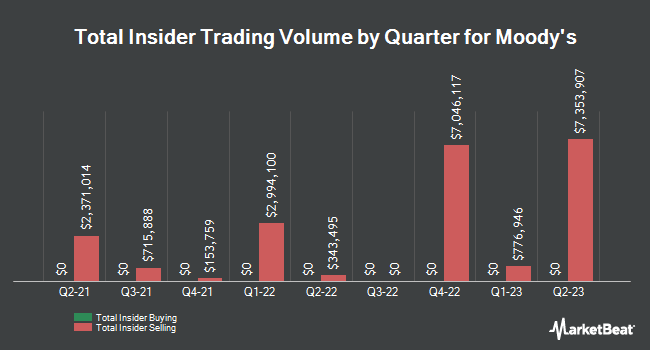 Bytom Trading Down 0.9% Over Last Week