Pacira BioSciences, Inc. (NASDAQ:PCRX – Get Rating) insider Roy Winston sold 476 shares of the firm’s stock in a transaction that occurred on Wednesday, August 3rd. The stock was sold at an average price of $55.70, for a total transaction of $26,513.20. Following the completion of the transaction, the insider now directly owns 44,992 shares in the company, valued at approximately $2,506,054.40. The transaction was disclosed in a document filed with the Securities & Exchange Commission, which is available at this hyperlink.

Pacira BioSciences (NASDAQ:PCRX – Get Rating) last released its quarterly earnings data on Wednesday, August 3rd. The company reported $0.51 earnings per share (EPS) for the quarter, missing the consensus estimate of $0.85 by ($0.34). The company had revenue of $169.41 million for the quarter, compared to the consensus estimate of $169.27 million. Pacira BioSciences had a net margin of 6.39% and a return on equity of 13.13%. The company’s quarterly revenue was up 24.9% on a year-over-year basis. During the same quarter in the previous year, the business earned $0.60 EPS. On average, equities analysts predict that Pacira BioSciences, Inc. will post 2.57 earnings per share for the current fiscal year. 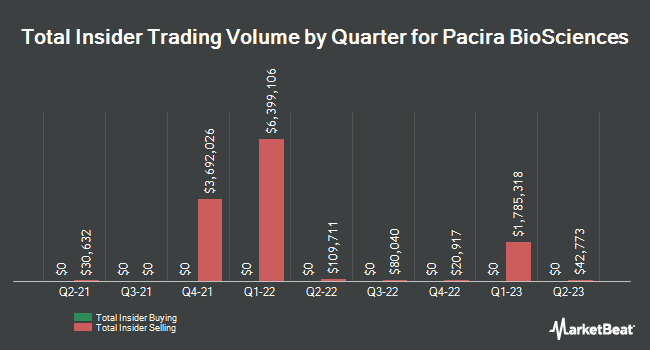 GamyFi Platform Trading Up 7.6% This Week

Complete the form below to receive the latest headlines and analysts' recommendations for Pacira BioSciences with our free daily email newsletter: