Universal Display (NASDAQ:OLED – Get Rating) last announced its earnings results on Thursday, August 4th. The semiconductor company reported $0.87 earnings per share (EPS) for the quarter, missing the consensus estimate of $1.00 by ($0.13). The business had revenue of $136.60 million for the quarter, compared to analyst estimates of $151.21 million. Universal Display had a net margin of 31.80% and a return on equity of 16.84%. The company’s quarterly revenue was up 5.3% on a year-over-year basis. During the same period in the prior year, the company earned $0.85 earnings per share. Equities research analysts expect that Universal Display will post 4.33 EPS for the current fiscal year.

Universal Display Corporation engages in the research, development, and commercialization of organic light emitting diode (OLED) technologies and materials for use in display and solid-state lighting applications. It owns, exclusively licenses, or has sole rights to sublicense approximately 5,500 issued and pending patents worldwide. 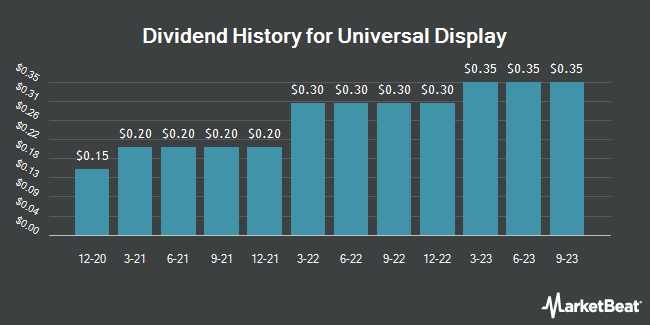 JCDecaux PT Set at €15.40 by The Goldman Sachs Group

Complete the form below to receive the latest headlines and analysts' recommendations for Universal Display with our free daily email newsletter: