Separately, Cowen decreased their price objective on shares of DigitalBridge Group to $34.00 in a report on Tuesday, August 9th. Two analysts have rated the stock with a hold rating, two have assigned a buy rating and one has issued a strong buy rating to the company. Based on data from MarketBeat.com, DigitalBridge Group has an average rating of Moderate Buy and a consensus price target of $36.20.

The firm also recently declared a quarterly dividend, which will be paid on Monday, October 17th. Stockholders of record on Friday, September 30th will be issued a $0.01 dividend. The ex-dividend date of this dividend is Thursday, September 29th. This represents a $0.04 annualized dividend and a dividend yield of 0.27%. 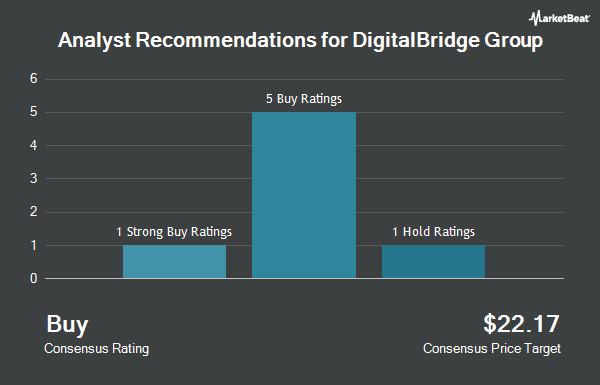 Complete the form below to receive the latest headlines and analysts' recommendations for DigitalBridge Group with our free daily email newsletter: