Kohl’s (NYSE:KSS – Get Rating) released its quarterly earnings results on Thursday. The company reported $0.82 earnings per share (EPS) for the quarter, topping the consensus estimate of $0.59 by $0.23, RTT News reports. Kohl’s had a return on equity of 15.04% and a net margin of 3.70%. The company had revenue of $4.28 billion during the quarter, compared to analysts’ expectations of $4.06 billion. During the same quarter in the prior year, the business posted $1.65 earnings per share. The company’s revenue for the quarter was down 7.0% compared to the same quarter last year.

A number of equities research analysts recently weighed in on KSS shares. StockNews.com started coverage on shares of Kohl’s in a research note on Wednesday, October 12th. They set a “hold” rating on the stock. Cowen cut shares of Kohl’s from an “outperform” rating to a “market perform” rating and cut their price objective for the company from $60.00 to $35.00 in a research note on Thursday, August 4th. Deutsche Bank Aktiengesellschaft cut their price objective on shares of Kohl’s from $36.00 to $34.00 in a research note on Wednesday, November 9th. JPMorgan Chase & Co. lifted their target price on Kohl’s from $28.00 to $30.00 in a report on Friday, September 16th. Finally, Evercore ISI lowered their target price on Kohl’s to $32.00 in a report on Monday, August 22nd. Three investment analysts have rated the stock with a sell rating, nine have given a hold rating and four have assigned a buy rating to the stock. According to MarketBeat, the company currently has a consensus rating of “Hold” and an average price target of $31.40.

Kohl's Corporation operates as a retail company in the United States. It offers branded apparel, footwear, accessories, beauty, and home products through its stores and website. The company provides its products primarily under the brand names of Apt. 9, Croft & Barrow, Jumping Beans, SO, and Sonoma Goods for Life, as well as Food Network, LC Lauren Conrad, Nine West, and Simply Vera Vera Wang. 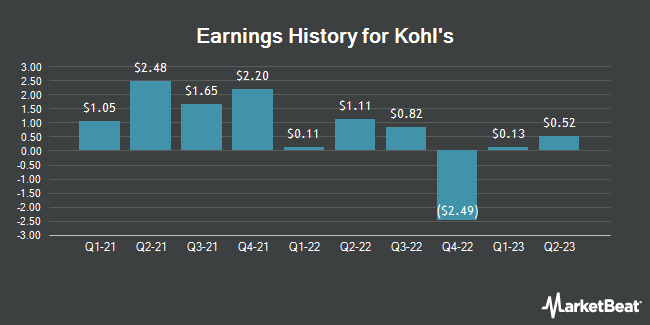 Receive News & Ratings for Kohl's Daily - Enter your email address below to receive a concise daily summary of the latest news and analysts' ratings for Kohl's and related companies with MarketBeat.com's FREE daily email newsletter.

Got Guaranteed Hits Self Reported Market Cap of $121.81 Million

Complete the form below to receive the latest headlines and analysts' recommendations for Kohl's with our free daily email newsletter: