Schlumberger (NYSE:SLB – Get Rating) issued its quarterly earnings results on Friday. The oil and gas company reported $0.71 earnings per share (EPS) for the quarter, topping the consensus estimate of $0.68 by $0.03, RTT News reports. The company had revenue of $7.88 billion during the quarter, compared to analyst estimates of $7.80 billion. Schlumberger had a net margin of 11.26% and a return on equity of 16.58%. Schlumberger’s quarterly revenue was up 26.6% compared to the same quarter last year. During the same period last year, the business earned $0.41 EPS.

The company also recently announced a quarterly dividend, which will be paid on Thursday, April 6th. Stockholders of record on Wednesday, February 8th will be paid a $0.25 dividend. This represents a $1.00 annualized dividend and a dividend yield of 1.74%. The ex-dividend date of this dividend is Tuesday, February 7th. This is an increase from Schlumberger’s previous quarterly dividend of $0.18. Schlumberger’s payout ratio is currently 29.17%.

Schlumberger NV engages in the provision of technology for reservoir characterization, drilling, production and processing to the oil and gas industry. It operates through the following business segments: Digital and Integration, Reservoir Performance, Well Construction, and Production Systems. The Digital and Integration segment combines the company’s software and seismic businesses with its integrated offering of asset performance solutions. 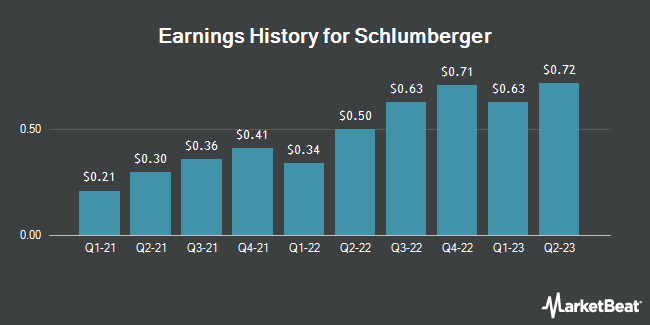 Mcashchain Trading Up 0.7% Over Last 7 Days

Complete the form below to receive the latest headlines and analysts' recommendations for Schlumberger with our free daily email newsletter: