Bank of Marin Bancorp (NASDAQ:BMRC – Get Rating) issued its quarterly earnings data on Monday. The bank reported $0.81 EPS for the quarter, topping analysts’ consensus estimates of $0.80 by $0.01, MarketWatch Earnings reports. Bank of Marin Bancorp had a return on equity of 11.54% and a net margin of 33.05%. The firm had revenue of $36.79 million during the quarter, compared to analyst estimates of $37.03 million.

Bank of Marin Bancorp Stock Down 3.5 %

The business also recently disclosed a quarterly dividend, which will be paid on Friday, February 10th. Investors of record on Friday, February 3rd will be issued a dividend of $0.25 per share. The ex-dividend date of this dividend is Thursday, February 2nd. This represents a $1.00 dividend on an annualized basis and a yield of 3.34%. Bank of Marin Bancorp’s dividend payout ratio (DPR) is presently 36.76%.

Institutional Investors Weigh In On Bank of Marin Bancorp

About Bank of Marin Bancorp

Bank of Marin Bancorp operates as the holding company for Bank of Marin that provides a range of financial services primarily to small to medium-sized businesses, professionals, not-for-profit organizations, and individuals in California, the United States. It offers personal and business checking and savings accounts; and individual retirement, health savings, and demand deposit marketplace accounts, as well as time certificates of deposit, certificate of deposit account registry and insured cash sweep services. 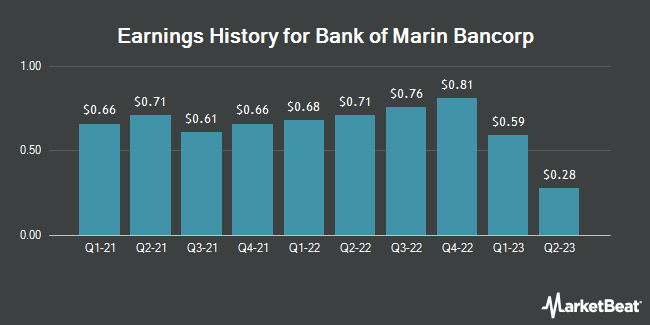 Mcashchain Trading Up 0.7% Over Last 7 Days

Complete the form below to receive the latest headlines and analysts' recommendations for Bank of Marin Bancorp with our free daily email newsletter: