First Horizon Co. (NYSE:FHN – Get Rating) announced a quarterly dividend on Tuesday, January 24th, RTT News reports. Shareholders of record on Friday, March 17th will be paid a dividend of 0.15 per share by the financial services provider on Monday, April 3rd. This represents a $0.60 dividend on an annualized basis and a dividend yield of 2.44%.

First Horizon (NYSE:FHN – Get Rating) last announced its quarterly earnings data on Wednesday, January 18th. The financial services provider reported $0.51 EPS for the quarter, topping analysts’ consensus estimates of $0.50 by $0.01. First Horizon had a return on equity of 12.98% and a net margin of 25.66%. The company had revenue of $882.00 million during the quarter, compared to the consensus estimate of $883.23 million. During the same quarter last year, the company earned $0.48 EPS. As a group, analysts forecast that First Horizon will post 1.83 earnings per share for the current year.

Separately, StockNews.com cut First Horizon from a “hold” rating to a “sell” rating in a report on Wednesday, January 18th. One equities research analyst has rated the stock with a sell rating and seven have issued a hold rating to the stock. According to data from MarketBeat.com, the company has a consensus rating of “Hold” and a consensus target price of $24.25. 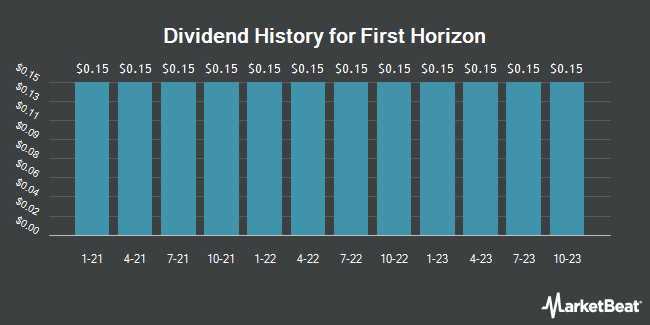 Decentralized Social Price Down 9.9% This Week

Complete the form below to receive the latest headlines and analysts' recommendations for First Horizon with our free daily email newsletter: