Intuitive Surgical (NASDAQ:ISRG – Get Rating) last announced its quarterly earnings data on Tuesday, January 24th. The medical equipment provider reported $1.23 earnings per share (EPS) for the quarter, missing analysts’ consensus estimates of $1.25 by ($0.02). Intuitive Surgical had a net margin of 22.52% and a return on equity of 11.54%. The company had revenue of $1.66 billion for the quarter, compared to analysts’ expectations of $1.66 billion. During the same period last year, the business earned $1.30 earnings per share. The company’s quarterly revenue was up 6.7% compared to the same quarter last year. On average, sell-side analysts anticipate that Intuitive Surgical will post 3.77 earnings per share for the current year.

Intuitive Surgical, Inc engages in the development, manufacture, and marketing of da Vinci Surgical Systems, and related instruments and accessories for invasive surgery. Its products include Da Vinci and Ion. The company was founded by Frederic H. Moll, John Gordon Freund, and Robert G. Younge in November 1995 and is headquartered in Sunnyvale, CA. 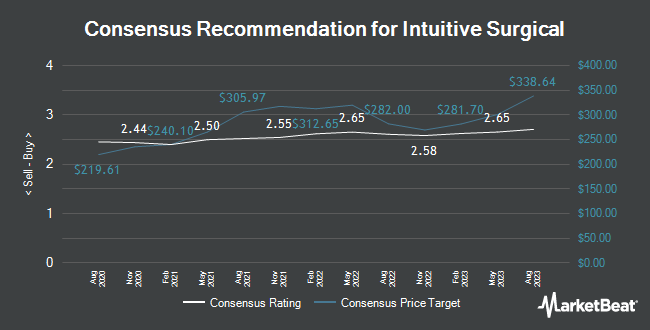