Match Group (NASDAQ:MTCH – Get Rating) had its price target hoisted by analysts at Barclays from $50.00 to $52.00 in a report released on Wednesday, The Fly reports. Barclays‘s price objective would indicate a potential upside of 2.26% from the stock’s previous close.

Match Group (NASDAQ:MTCH – Get Rating) last issued its quarterly earnings results on Tuesday, November 1st. The technology company reported $0.45 EPS for the quarter, missing analysts’ consensus estimates of $0.52 by ($0.07). The firm had revenue of $809.55 million for the quarter, compared to analyst estimates of $793.03 million. Match Group had a negative return on equity of 94.07% and a net margin of 3.39%. Analysts predict that Match Group will post 1.4 EPS for the current fiscal year.

Match Group, Inc provides dating products worldwide. The company's portfolio of brands includes Tinder, Match, Meetic, OkCupid, Hinge, Pairs, PlentyOfFish, and OurTime, as well as a various other brands. The company was incorporated in 1986 and is based in Dallas, Texas. 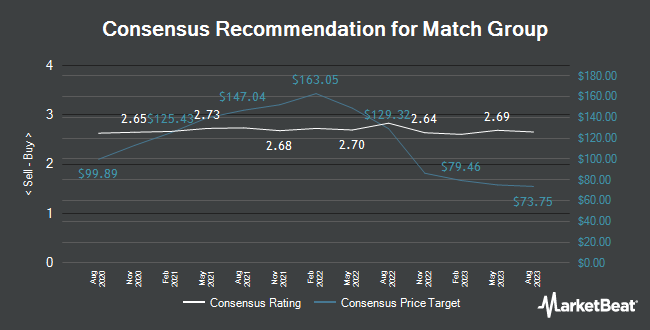