SmartFinancial (NASDAQ:SMBK – Get Rating) issued its quarterly earnings data on Monday. The bank reported $0.76 EPS for the quarter, beating the consensus estimate of $0.74 by $0.02, MarketWatch Earnings reports. The business had revenue of $54.44 million during the quarter, compared to the consensus estimate of $45.29 million. SmartFinancial had a net margin of 21.36% and a return on equity of 9.30%.

The company also recently announced a quarterly dividend, which was paid on Tuesday, November 29th. Investors of record on Monday, November 14th were paid a dividend of $0.07 per share. This represents a $0.28 dividend on an annualized basis and a yield of 1.02%. The ex-dividend date was Thursday, November 10th. SmartFinancial’s dividend payout ratio is presently 12.84%.

In other news, Director Cathy G. Ackermann bought 5,000 shares of the stock in a transaction that occurred on Monday, November 7th. The stock was acquired at an average price of $28.99 per share, with a total value of $144,950.00. Following the completion of the purchase, the director now directly owns 12,410 shares of the company’s stock, valued at $359,765.90. The acquisition was disclosed in a filing with the Securities & Exchange Commission, which is accessible through the SEC website. Insiders sold 729 shares of company stock valued at $20,981 over the last quarter. Insiders own 8.91% of the company’s stock.

Institutional Investors Weigh In On SmartFinancial

SmartFinancial, Inc is a holding company, which engages in the provision of commercial banking services through SmartBank. The firm manages branches and loan production offices in a footprint spanning East Tennessee, Southwest Alabama, the Florida Panhandle, and North Georgia. It operates through the following portfolio segments: Commercial Real Estate, Consumer Real Estate, Construction and Land Development, Commercial and Industrial, and Consumer and Other. 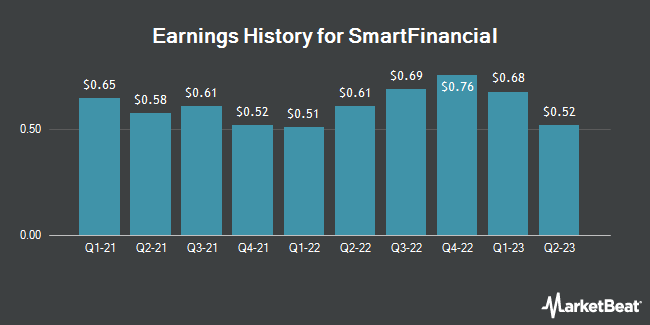 Complete the form below to receive the latest headlines and analysts' recommendations for SmartFinancial with our free daily email newsletter: